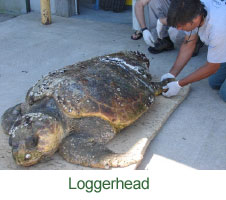 Only seven species of sea turtles can be found in the oceans of the world, five of which are found in the waters off Georgia’s coast. The loggerhead (Caretta caretta) is the only species to nest here regularly on islands such as Jekyll, Sea, Sapelo, Ossabaw and other barrier islands. The other four species, including the hawksbill (Eretmochelys imbricata), Kemp’s ridley (Lepidochelys kempii), green (Chelonia mydas) and leatherback (Dermochelys coriacea), prefer more tropical nesting locales yet use the Georgia coast for food and shelter and as a travel corridor to other destinations.

All five species of sea turtles found in Georgia are protected by state and federal law, principally by the Endangered Species Act. The Kemp’s ridley is the most endangered of the sea turtles, but all species are at risk. The loggerhead is listed as threatened worldwide and is the focus of much of the Nongame-Endangered Wildlife Program's sea turtle conservation efforts along the coast.

Like all sea turtles, the loggerhead is completely adapted to life in the ocean and depends on land only for reproduction. Only the female returns to the beach. When female turtles reach maturity (15-30 years), they leave the water and dig a nest in the sand on the beach, deposit the eggs, cover the nest, then return to the water. In each nesting season, a female may lay up to six clutches, each containing 100-150 small, white, leathery eggs. This process takes place every 2-3 years for each female. After incubating for about eight weeks, the eggs hatch, and the hatchling turtles emerge from the nest and scamper to the ocean. 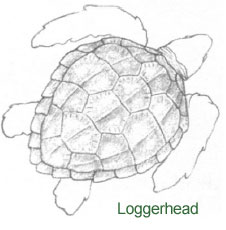 Loggerheads in the United States nest from North Carolina to Texas. The species nests in Georgia from late May to mid-August. Generally, female turtles nest on the same beaches each season, with some variations. It is widely believed that hatchlings, when grown, return to their natal beaches to nest. Florida hosts the largest nesting population in the U.S., while surveys conducted by the Georgia Department of Natural Resources (GA/DNR) Nongame- Endangered Wildlife Program biologists indicate Georgia averages 1,000 to 1,300 nests per year.

Because loggerhead nests are subject to predation by raccoons and feral hogs, poaching and habitat destruction, Program biologists and volunteers monitor individual nests regularly during spring and summer. Beachfront business owners and residents are also urged to reduce lighting of the beach during nesting season in order to avoid attracting hatchlings, who mistake the artificial lights for moonlight and are drawn away from the ocean.

The endangered leatherback turtle is the largest and most active of the sea turtles. They travel thousands of miles, dive thousands of feet deep, and venture into much colder water than any other kind of sea turtle. Up to eight feet in length, these huge turtles have a rubbery dark shell marked by seven narrow ridges that extend the length of the back. Remarkably, leatherbacks feed on jellyfish and soft-bodied animals that would appear to provide very little nutrition for such huge animals. Ingestion of plastic bags and egg collecting are reasons for mortality and population declines. Less than 10 leatherback nests are recorded in Georgia each year. 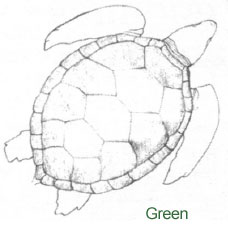 The green turtle, named for the greenish color of its body fat, is listed as endangered in Georgia. Most green turtles nest in the Caribbean but 500 to 2000 nests are recorded in Florida each year. Green turtles are considered infrequent nesters in Georgia. Green turtles have been hunted for centuries for their meat and the gelatinous “calipee” that is made into soup. Hunting and egg gathering have reduced their number greatly. Green turtles are the only sea turtles that eat plants. They graze on the vast beds of sea grasses found throughout the tropics. Some populations travel over a thousand miles over open ocean to nest on islands in the mid-Atlantic. 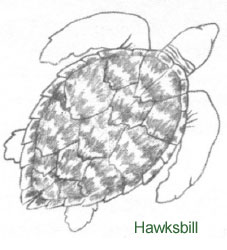 The endangered hawksbill, a relatively small turtle, has been hunted to the brink of extinction for its beautiful shell. Hawksbill turtles do not nest in Georgia and are rarely found in Georgia coastal waters. Hawksbills feed on sponges and other invertebrates and tend to nest on small, isolated beaches.

The rarest and smallest of all sea turtles, the endangered Kemp’s ridley feeds in the coastal waters of Georgia on blue crabs and other crabs and shrimp. All Kemp’s ridleys nest on a single stretch of beach on the Gulf coast of Mexico.

In the water, sea turtles face threats including entanglement in or ingestion of plastics, accidental drowning in shrimp and fishing nets, collisions with boat propellers, poaching and habitat destruction. The use of Turtle Excluder Devices (TEDs) by shrimpers and other commercial fishermen and other conservation measures have reduced the occurrences of sea turtle deaths, yet these species still face a challenge to survival. 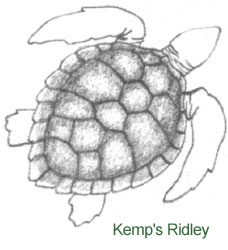 Biologists urge the public to assist in conserving loggerheads and other sea turtles.

Following are some tips:

GO BACK A PAGE